The primary purpose of the Workers’ Compensation system is to provide workers’ with an income while they are recovering from an injury.  The amount of the payments a worker receives will be based upon his/her Average Weekly Wage (AWW).  The most important number in Workers’ Compensation is the employee’s average weekly wage.

How to Calculate the Most Important Number in Workers’ Compensation

Generally, the AWW is calculated by looking back fifty two (52) weeks from the date of injury and dividing the gross amount of earnings by fifty two.  Any bonuses, overtime, commissions or other incentives can be included in the gross amount.  A percentage of the AWW is then paid to the injured worker depending upon whether he/she is totally or partially disabled from work.

If a worker has not been employed for a full calendar year before the injury, typically the number of weeks worked will be used to divide the gross earnings for that period.  As an example, if the worker were employed for 26 weeks and made $20,800 during that time, the AWW would be $20,800 divided by 26 to equal $800.00. 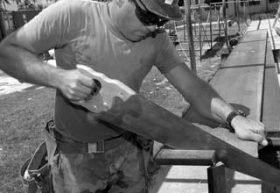 However, the above example does not hold true when the job held at the time of the injury is seasonal in nature.  Take the case of a teacher who works 38 weeks a year.  Courts have held that the gross yearly income from the job should be divided by 52 weeks rather than the actual number of weeks worked, 38 in this example. This confuses how to calculate the most important number in workers’ compensation.

Concurrent employment is defined as a job an employee is actually working at the time of the injury, or a contract for hire that is in place when the injury occurs.  If an injured worker is concurrently employed at the time of his/her injury, the wages from both jobs will be considered in the calculation of the AWW.  As an example, if the AWW from the job where the injury occurred is $800.00 and the AWW from the second employer is $200.00 the total AWW will be $1000.00 a week.  Any number of jobs can be included in the calculation of the AWW.  However, there is one important exception to this rule. Only wages from jobs where the employer has workers’ compensation insurance can be included.  This means a worker who is self-employed or works for someone else who does not carry worker’s compensation cannot have those wages included.  The other limitation is that the job must be one where the employer carries worker’s compensation insurance coverage in the state of Massachusetts.

Listen to what our client’s have to say.